I am a bit of a social network junkie. I’ll try anything. I’m on Facebook, Twitter, LinkedIn and Google +. I’ve used Path and Instagram and Photovine and Goodreads. I even occasionally check my Ping page. So when I heard so much hullabaloo on the interwebs about Pinterest I wanted to give it a try (you even have  to be invited, so it makes it seem even more exclusive.)

No doubt you’ve heard of Pinterest, probably from your wife or sister and probably with a comment about how addicted they are. Techcrunch.com reported that 97% of Pinterest users are female. And while I can’t say that I am addicted or spend hours madly pinning things to my boards, I think there is some room (and a need!) for more men to join Pinterest.

First off: What is Pinterest? Basically it is an online bulletin board. It is a way to organize bookmarks of websites or ideas that you might want to visit later. Other people can see what you have “pinned” and re-pin it to their own boards, comment on it, email it to a friend, etc. When I started using Pinterest (and it is still what I primarily use it for) it was to keep track of recipes I had seen online that I wanted to try. Rather than having hundreds of bookmarks I had to flip through to find a recipe I wanted, I have an easy to navigate visualization of everything I have saved.

I know bookmarking recipes probably isn’t really selling you on the whole “Why Men should be on Pinterest” argument. But I also pin DIY projects and ideas of things I would like to do around the home and garden. I have a pinboard of tech products I want to buy. You could just as easily have a pinboard of workout ideas, hikes you want to do or interesting articles you want to come back to later. There is also a whole world of humor (Like Beccy’s “Trying to Hard” board) and geeky fun.

So as you begin to navigate the world of Pinterest, here are a few things that I have learned:
1. It is really complicated plan Young Women’s Values night. Every third pin is a recipe for pretzels dipped in values-colored chocolate, or crocheted Values-colored iPod cases. I guarantee the men of the church are not spending 1/100th of the time planning anything for the Young Men.
2. Some women like to imagine Ryan Gossling is saying sensitive things to them, because you get a lot of these: 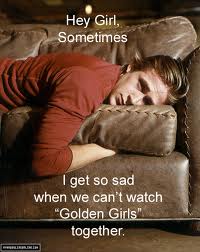 I’m not judging. Let’s be honest, if I looked like Ryan Gosling I would have a board called “Awesome Pictures of Me: Check out my Hair.”
3. Feel free to unfollow anyone who starts pinning a lot of ideas for great Halloween decorations in February.
4. People like to put babies in bowls and take pictures of them. What’s up with that?
So join me in the world of pinning. Let’s get some men pinning manly things. And if you are not into manly things, I have some great ideas for Young Women’s values night that I wanted to discuss.