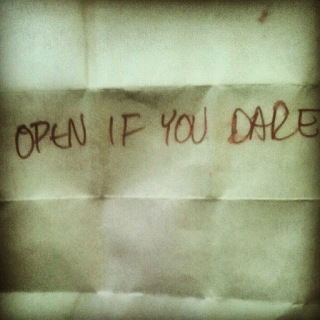 So now I have the unenviable task of having to follow Patrick’s touching and beautiful post about his son, Milo. Not that Part Time Authors is a competition, but I don’t have anything nearly as meaningful to say. I love my kids, too, but half of them look exactly like me and it’s sort of tragic. Anyway, I thought the only thing to do is to simply do what I do best: write as shallow and as arbitrary a blog as possible! It’s my special gift. So I thought I would tell you about a bunch of crap I found in my drawer.

When I was growing up my Dad had a special drawer that we would always pilfer for money or candy. It almost always delivered on both accounts, even if the money was just nickels and the candy was just Altoids. When we needed a fix, we knew where to go! But it was also kind of a gross drawer. You know, like a gross old dad drawer? For one thing, this drawer doubled as an underwear drawer, which was fine, but sometimes you would go digging for dimes and run across this nasty old stretched out jockstrap. Or sometimes you would find broken sunglasses, or a big stack of business cards. Sometimes we found cassette tapes and floppy discs. There was just a lot of crap in there. It wasn’t fun to rummage through, but I always thought it was something dads did. And guess, what? I was right!

I realized this past week that I have the exact same drawer. The only difference is that my drawer is lower to the ground and therefore a little more accessible to my children, and I don’t own a jockstrap (I wear Superman briefs from Target when I go running.) But you would be amazed what I found in there when I pulled everything out! It was a treasure trove of skeezy old dad things. Like Aladdin’s cave! If Aladdin were a crazy old hoarder. Here is a sampling of some things I found!

1. An old watch. Also from Target! It doesn’t work.

2. Three pairs of old glasses. I always save my old glasses thinking that I’ll still wear them as “options.” But I never do. I wear the same pair of glasses every day. So my old ones just lay in my drawer and get scratched up by random thumbscrews and pennies.

3. Something from IKEA called a “Metrik.” Still in its packaging. What is it? Why did I buy it? I dare you to open it! It’s probably just a Swedish jockstrap.

5. A medal I got from Phoebe and Owen’s piano teacher. It was like a “hooray for doing a duet” award. It was for a duet I did with Owen at his Christmas recital. I really appreciate it, and I know it took time and effort to make the award, but that was the easiest duet ever. I just thumped around a little in the bass clef. We practiced 5 minutes before the recital. Anyway, here is a picture of my kids wearing this kind of medal. After we took this picture I got one, too:

6. A giant gift bag for dental care. I assume my dentist gave it to me? I never opened it. It’s in a fancy gift bag and it’s full of floss and travel-size mouthwash and a new toothbrush. I must not have been very excited about it. Anybody want it?

7. My passport. You know how people are always complaining about how their passport picture makes them look creepy? Mine really does. It really, really does. Like I drive a rickety dangerous ice cream van.

8. Some optical wipes that come in little plastic packets. They fool you, because you think they are condoms!

10. A Strength of the Youth booklet. Right next to the condoms.

11. A gift card for Lowe’s to buy a new wheelbarrow. AWESOME!!! I’ve been looking for this!

12. A note Tara Chalmers found and gave me a few years ago, which I had written her when I was sixteen years old. At this time, I was working at our local market called Kent’s. In this note I’m accepting her invitation to go to a school dance. On the outside it says OPEN IF YOU DARE and on the inside it says:

Dear Tara. I was so angry when I got home from Kents because I realized that the Top Ramen I wanted was actually SAMYANG RAMEN. What I was going to say was “Dear Tara I think you are (or maybe U.R.) TOP ramen.” Now you understand my frustration. I can’t make a joke about Samyang (racist.)
Anyway, I’m sorry I waited so long to answer, but you knew I was saying YES and so let’s clog. I’m going on the father’s and son’s outing did you know that? Yee-ha! I hope you have a super Friday night. I hears J.S. is having a party (booze, babes) or maybe you could stay home and watch “Hair” again (w/ nude scenes this time.) I hope you enjoy the noodles.
Love, Christopher (I’m so excited! I’m about to lose control and I think I like it!)
PS. Will you help me plan my church talk Sat. night?
PPS. Samyang Ramen is 7 for $1 at Kents

13. A mysterious piece of rope, about 36 inches. Deep blue. Maybe a drawstring?

14. Some Shakespeare gum. People are always giving me Shakespeare things. It’s nice, but at the end of the day a lot of these trinkets wind up in my gross old dad drawer. I mean, it’s just gum.

16. A TV clicker that we don’t use, and probably don’t have the TV for.

18. A funny picture Dave Tinney drew for me of a lady we work with being chased by a swarm of bees.

19. A root beer dum dum. Joke’s on you, kids! That’s the grossest flavor. Steal away!

25. Nine chapsticks. I’m always complaining that I can’t find any chapstick, so Lisa keeps buying me packs of chapsticks. And I put them in this drawer and then complain about how I don’t have any chapstick. So Lisa buys me another pack. Wash, rinse, and repeat.

26. Money! Now this is wait you’ve been waiting for! I currently have $6.53 in change in there. I also have one dollar bill. But in addition, I also have 8.30 in British Pounds, and 3.70 in Euros! So it’s a challenge, especially for Hugh and Margaret who might think that any coin is an American coin. It’s a teaching moment. Because when you steal money from your dad you might feel sneaky, awesome and victorious, but how will you feel when you try to buy a Surf-n-Slurp with a Euro? They won’t take it. I’VE TRIED!!!!!

It Hardly Ever Happens, You Know. »
« You Have No Idea.