Wax On, Wax Off

I need everyone to sit down, please. I have some unfortunate news for you, and I think you should brace yourself. My dear friends, I have been diagnosed with folliculitis. That’s right, let it sink in. I know you are in shock, so take just a few minutes to regain your composure. I remember when I found out. It was 1993.
For those not familiar with this particular ailment, folliculitis is a condition where hair follicles are damaged by friction from clothing or shaving, and result in a rash or tiny, ingrown hairs. According to the Interwebs, pseudofolliculitis barbae is a similar disorder, but occurs mainly in black men, where curly beard hairs are cut too short, and curve back into the skin and cause inflammation.
I remember thinking that pseudofolliculitis barbae sounded more like what I had, but despite my vertical leap and ability to lip sync every last word to EnVogue’s “My Lovin’ (Never Gonna Get It),” the dermatologist told me it was plain ol’ folliculitis. I told him, “Whatevs, home slice. Shoo’(t).”
I asked for the cure, and the doctor told me, “Grow a beard.” I was a BYU student at the time, and in case you live in a cave or were born on the Bayou, you may have recently heard that BYU has an Honor Code; and one of the standards is you could only sport a beard on BYU’s campus with proper documentation (read: a Beard Card) and a signed agreement that you clearly understood that you were, in fact, not going to heaven.
For the next couple of months I dabbled in a cornucopia of methods to tame this ailment. One of which, I will now publicly and shamefully disclose: Waxing. 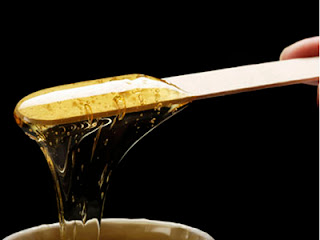 Yep, waxing. My thinking was that if I pulled all the hair out of my neck in the most excruciating method known to man, then I would not have to shave my neck for an extended period of time, and that would give my follicles a much needed vacation from the steel blade that caused them so much irritation. This seemed completely logical to me. Of course this was at a time in my life when a number of techniques or practices that were reckless and possibly illegal seemed “logical” to me.
I brought the kit home from Smith’s, heated up the wax on the stove, and stripped down to a towel, so as to not get wax all over my clothes. I wasn’t sure of the extent to which this could go badly. But I was confident it could at least destroy my clothing and possibly the entire apartment.
I had carefully timed it so that this experiment would be conducted alone, while my three roommates were occupied with an assortment of activities outside of our apartment.
Unfortunately, my roommate and dear friend, Lincoln, unexpectedly came home and walked in on an awkward scene of me in the vanity area, in a towel, slathering hot wax onto my neck.
The apartment and in fact the entire city of Provo, Utah, went silent as Lincoln and I locked eyes. Finally, somewhere in the far end of the county…a dog barked.
“What’cha doin’,” asked Lincoln, carefully, as if he were trying to talk me into letting a hostage go free.
“Just…you know…nuthin’.” I answered, casually putting one hand on my hip and hiding the container of wax behind me with my other hand. Silently praying that he wouldn’t notice the single strip of wax on the right side of my neck, or the fact I was only in a towel. Or that I had an Enya cd playing. And some candles burning.
“Is that wax?” he began his questioning.
“Perhaps.”
Then, with both hands up, as if showing he wasn’t concealing a weapon, “I think you should put that down.”
“It’s too late,” I stood my ground. And turning to face the mirror, “I’ve already started. And I’m doing this.”
“My friend…I don’t think you understand the significant pain this is going to cause you.”
“I’ll be fine,” I snapped back, coating the rest of my neck with heavy, heavy layers of hot wax.
When the wax had hardened (no, of course I hadn’t read the directions) I stepped back up to the mirror to get a good, close look at my neck, and strategize where I could get a firm hold of a corner of wax (no, of course not paper, didn’t you read the part about how I didn’t read the directions?).  I was almost giddy to pull off sheets of wax and hair and folliculitis. And there, by my side, was Lincoln, morbidly anxious to watch the process.
With my right hand, I latched on to the left upper corner of wax on my neck, just below my ear, with a plan to pull a triumphant sheet of wax and hair and folliculitis – and in fact all my problems – diagonally down. I gave it a slight tug just to test its bond to my skin. And that was the precise moment when I realized that I just might be wearing a slab of wax on my neck for the rest of mortality, because it certainly wasn’t going to come off.
“At least I’ll never have to shave again,” I thought. I tugged again, significantly harder this time.
“SWEET SAINTS AND SOLDIERS, DID SOMEBODY TAKE A FLAMETHROWERE TO MY FACE! MORPHINE! I NEED MORPHINE!”
This is what my brain was yelling at me. But on the outside, I was strong enough for a man, even if I was using this stuff that was made for a woman. All Lincoln could see was a single, huge tear well up in my right eye.

“See? It’s fine.” I over-confidently stated. Then, while Lincoln scrutinized, and I successfully kept the tears at bay, I started to painfully, meticulously, agonizingly pull bits, chunks, flecks and even shards – but never sheets – of wax off my neck. It was as if the wax was “white” and my neck was “rice.” They simply refused to be separated without a fight.

After a long time and a lot of yanking, I finally put my foot down and asked Lincoln to not follow me as I stepped into a hot shower to try to scrape off any wax remains. I got out and checked myself in the mirror again. My neck was florescent red; literally glowing. It was like a beacon. It was the Rudolph of necks, and if Santa had been recruiting, well, I’d be on a much different career path than I am now.
Then, to add insult to red and painful injury, not only was it unsuccessful in postponing the need to shave, but it rendered my neck so raw, it was if I had tried to shave with a dull potato peeler. My ambitious experiment had failed huge.
The remedy I finally settled on, and still utilize to this day, is to shave with an electric razor every other day. This seems to keep the folliculitis at bay. However, on occasion, and usually when I’m listening to RUN DMC, I find my pseudofolliculitis barbae still flares up, yo.