Have you heard of this?  It is very real and I am very not making this up.  So, we live in Utah and where we live is beautiful and full of wildlife and wild life…and sometimes they mix.
The following is from foxnews.com (I know, I know but read it anyway):
Utah authorities are working to identify a man spotted dressed in a goat suit among a herd of wild goats in the mountains of northern Utah.

“He was clumsy, working his way down the cliff trying to catch up with the rest of the herd,” photographer Coty Creighton told the station. “With the binoculars, I could clearly see it was a guy dressed up in a homemade goat suit.”

Creighton said the man appeared to be wearing heavy gloves so he could crawl on his hands and knees. He also said that at one point, the man lifted his mask and looked up at him for several minutes.

“He kind of slouched down, like was getting nervous or was feeling really self-conscious,” Creighton added. “He actually got off his hands and knees and sat on the hill for several minutes until he thought I was gone.”

Phil Douglass of the Utah Division of Wildlife Resources said 60 permits will be issued for goat hunting season in that area, which begins in September. He worries the goat man might be accidentally shot or could be attacked by a real goat.

“They may get agitated. They’re territorial. They are, after all, wild animals,” he said. “This person puts on a goat suit, he changes the game. But as long as he accepts responsibility, it’s not illegal.”

Creighton, 33, was hiking Sunday when he came across a herd of goats. He said he realized something was odd about one goat that was trailing behind the rest.

“I thought maybe it was injured,” Creighton said Friday. “It just looked odd.”
He said he pulled out binoculars to get a closer look at the herd about 200 yards away and was shocked. The man appeared to be acting like a goat while wearing the crudely made costume, which had fake horns and a cloth mask with cut-out eye holes, Creighton said.

“I thought, `What is this guy doing?’ ” Creighton said. “He was actually on his hands and knees. He was climbing over rocks and bushes and pretty rough terrain on a steep hillside.”

Creighton moved down the mountain and hid behind a tree, then began snapping photographs.
“We were the only ones around for miles,” Creighton said. “It was real creepy.”

Okay, so what does he look like?  Well, a quick google search gives you a couple options, let’s see if you can pick the Goat Man in question…it’ll be like a game! 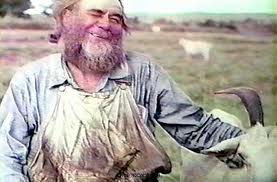 So whadda think? Not a real great option for you if you have to run into a goat man in the woods of Utah.
Well if you guessed the third or middle picture, you got it!  Some guy somewhere in my state has fashioned himself a homemade goat suit for Goat knows what reason to do Goat knows what to those poor unsuspecting but wild hillside goats. What is the world coming to…and what’s more, what is this blog coming to for covering such an event?! Ahh well, you know the old saying…(get ready for it)
‘A man’s goat to do what a man’s goat to do.’
BLAMO!

pioneer children »
« Bling It On