The Big Red Van of Death! 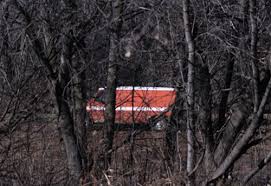 So, once, a few friends of mine found ourselves loading up into my buddy’s 15-passenger van. They called it “Big Red,” either because they super love the gum or because it’s a red 15-passenger van, I never clarified.  It was October and we wanted to do something real cool and real scary.  So we made our friend “Chris” tell us scary stories as we drove around Provo…Utah.  Well, things got real cool right off the bat, I mean, I was in the very very back seat with two girls, one my friend “Kacy”who was totally involved with my other friend “Christian” and the other was my wife; still, I was optimistic about my odds. “Chris” wanted everyone to quit messing around and get spooky.  He put in scary music, but it kinda got too loud at times, and then our friend “Josh” was complaining that Flight of the Valkyries was not that scary, but I thought that if Zombies were to organize and get uniformed up then Flight of the Valkyries would be wildly scary. Anyway, we killed the music halfway into the spooking.  So, I could tell right away that my wife was getting super scared cause she kept screaming and then snuggling me and we were giggling, all the while trying not to get caught by “Chris” who was telling us how one time, in that exact house, one of his students heard footsteps going up and down the stairs.  Or how from that hill, when Jesus comes, Ancient Native Americans will rise up and…well I’m not sure what they are gonna do, whatever Jesus wants, I guess, but still scary.  And we (the other eight of us) were sort of goofing off and saying that we should all get a booth at the pizza place across from “The Hill” so we could watch rising Indians and share a slice of Zah. Needless to say, if you think this showdown went down 20 years ago, you, mother, would be wrong.  It was two weeks ago. The average age packed into “Big Red” was 40.  My friend “Lisa” actually had to give one of her kids the brush off:

Kid: “Now, where are you guys going again?”

Lisa: “I’m just going out with my friends.”

Lisa: “Ugh, we are just going to drive around!”

Kid: “You and your friends are going to just going to drive around?  Where?”

Lisa: “NOWHERE, GOSH!  We are just gonna drive around, gall, go to bed would ya.”

So four and a half couples, all with more than one child–some with seven–driving around Provo’s most haunted spots, which, after the giggles and wiggles begin to fade (we’re all old and can only keep that crap up for a while) we find out that Provo is kinda creepy…at least where ever “Chris” goes. I would hate to short hand his terrifying tales about old theaters and Polygamist houses in a stand off, but you should know you missed quite a night. And so on this All Hallows Eve, Part Time Autors invites you to dump the kids and call your old friends.  Climb into the biggest car your friend has and tell a few tales, remember the second house you lived in and the dreams that woke you there, download a ghost app, eat great food and read a fine book and enjoy these days, these days where we may be older than our kids but we are still much younger than our parents, those poor farts.