This weekend my wife and I took Milo and went to Nashville…Tennessee. And here’s the thing, it’s real cute. No, like the city is all Art Deco with buildings like this one: 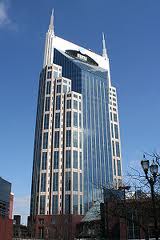 It’s the AT&T building and it is amazing and looks like this at night: 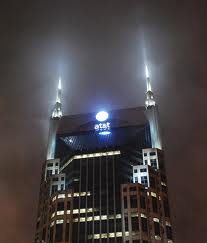 And looks like this in the Land of Mordor:

We saw lots of awesome stuff but I wanted to give you a highlight of two spots, in case you find yourself in Nashville this week.

Dinner on Thursday night is at Monells, this quaint little place surrounded by a tight garden and a small Koi pond.  The place is comfort food from top to bottom.  Here’s the deal, you sit at a table with a bunch of strangers and then they just bring you the food they cooked today.  When we are led to our table there is only a single man sitting at the head of the table.  He smiles and complements our baby. (We took Milo and left Daisy at home to have a wonder filled weekend with her Grandma’s. Turns out, nobody slept.)  We sit to his left and, eventually, across from us sits an older couple from Cincinnati.  At the other end of the table, a group of four (two couples) join us; however, they engage only each other and are not much to remember. The gentleman at the head of the table is kind and has four kids (three girls and (finally) a boy), he is married and is in Nashville for a training and has snuck off to Monells (his favorite) to get dinner before he drives back home to Memphis.  He becomes the table’s captain as he has been here many times and he knows all the tricks (don’t fill up on the cheap stuff, save room for the main dishes).  Then, our table is overloaded with food: Corn Bread and Fresh Peach preserves, Tomato and Onion Salad (P’s favorite), Pasta Salad, Turnip Greens, Stewed Cabbage, Mashed Squash (L’s favorite), Smashed Potatoes, Fried Chicken, Roast Beast in Gravy, Meatloaf, and to drink: Sweet Tea, not Sweet Tea, Water, Lemon Aid and for dessert, Peach Cobbler.  We are starving, but our captain tells us to pace ourselves and we do a pretty good job.  We get great bites and bites of great food, but you do get the feeling you could seriously binge your way into a comma if you didn’t have a good ‘Table Captain.’ Everyone dies over Milo and Milo dies over everyone.  They all say how happy and aware he is.  The waitress is a sweet, round woman who puts her hands on my shoulders as she addresses the table.  The Cincinnati couple is in town visiting a friend who is attending a Lindsay’s same conference.  Lindsay knows the friend but I don’t remember the name. Eventually our Table Captain has to leave and the rest of us file out, but as he goes he says to us, “When people tell you you have a happy baby, it is a reflection of good parents.”  He smiles and thanks us all for a great evening.  It was a dinner I will remember always and I hope this week you go to Monells…in Nashville.  If you can’t I’m sure you can swing something similar at the Village Inn, just sit down at a strangers’ table and pass their plates to the left, start eating, and enjoy the ensuing conversation. 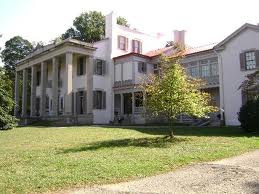 Also we went to a lovely and old plantation called Belle Meade, a beautiful, proud 50,000 acre plantation built on the back of thoroughbred horses and slaves, that now lets middle class tourists not take pictures of its redecorated rooms. And today is the first day it is set up for Christmas.  The tour is nice, the tour guide is both bothered by and dependent on us, his 1:00 group.  Stragglers keep interrupting his memorized speeches; at one point he simply lifts his voice over the sound of latecomers pounding on the front door of this 200 year old house and then strides over, unlocks the door, and greets them with the exact same engaging cadence he used when greeting the rest of us who made it on time.  I’m left both hating him and reveling in him.  The rooms are high ceilings and patterned carpets in bright colors. My favorite room is a “Tiffany Blue” with “Harvest Gold” curtains that lay flat but the center is cut out and scalloped with a fringe.  I like the idea of  just cutting out the shape of the curtain opening. I want to use it in the future; also, the bright but French color combo of the pale blue with the true gold. I would post pictures, but the tour guides forbid the taking of them.

They don’t do a tour of the Servant Quarters because “That’s where tour guides go when they aren’t giving a tour,” I am told without irony. But we do take in the Slave Cabin which has been curated by a group of youth curators who put up chalk boards asking me to “Draw what I think it was like for Slaves.”  Someone has drawn a lynch mob with torches and pitch forks. I did not draw anything. I did find myself skeptical of the stories that were being presented to me: “After Emancipation the Slaves had to decide what they wanted to do now; one man, who had been over all the horses now got a job to be the man over all the horses and was the highest paid hand on the plantation!”  Is it impossible to portray the history of a place and allow for both the beautiful and ugly to stand side by side and not give in to the need to sweeten what’s being presented? Probably not. But it was a lovely house with one family owning several other families.  But that was all before the gift shop was added.

Nashville is a beautiful place, one I will remember always. When I was young I couldn’t wait to travel the whole wide world, but as I get older I am amazed at the wonders that are in America.  I could spend the rest of my life just seeing what is hidden between Canada and Mexico. That being said, get out there and vote! Unless you are going to vote wrong, then I would just prefer you stay home.